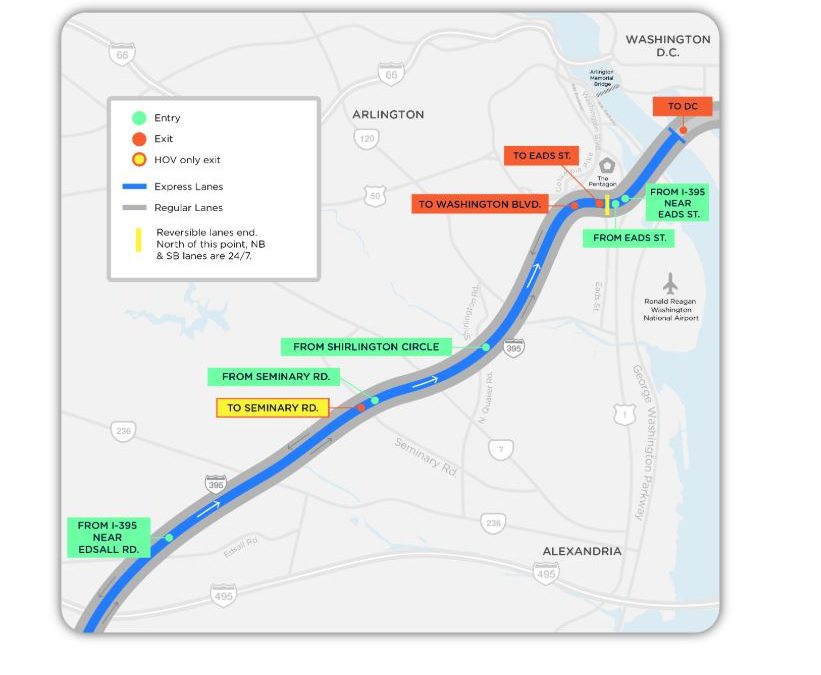 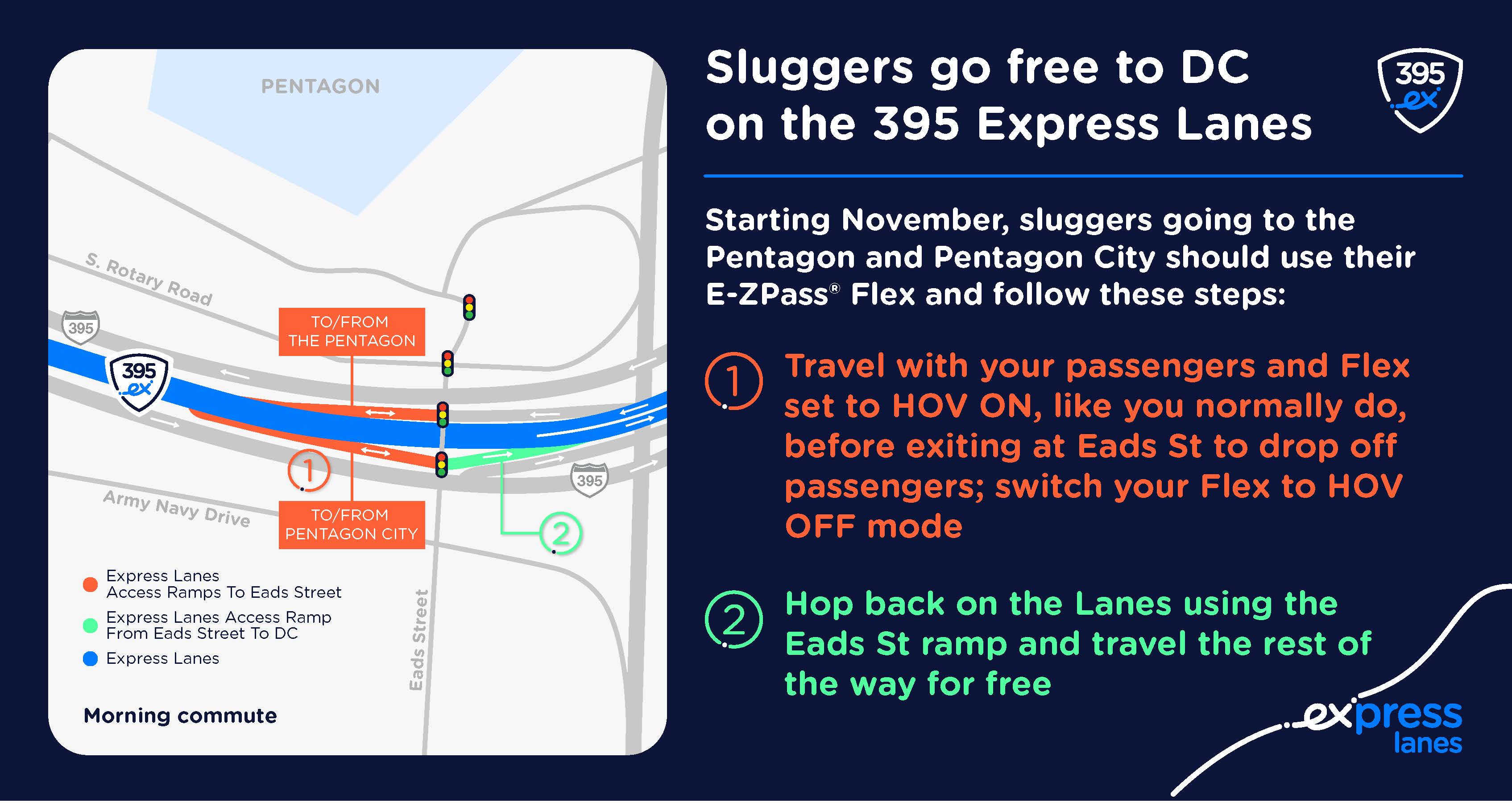 The 395 Express Lanes are coming this November

The I-395 HOV lanes will become Express Lanes in November. Thanks to the 95 Express Lanes, most HOV customers along the I-95/I-395 corridor are familiar with how to use Express Lanes and already have an E-ZPass® Flex. (And, they know how great it is to ride toll-free.)

· The 395 Express Lanes will extend 8 miles from near Edsall Road in Fairfax County to the 14th Street Bridge near Washington D.C.

· The Seminary Road south ramp will remain HOV-only at all times.

Drop off carpool passengers near the Pentagon or Pentagon City?

To avoid disruptions to carpooling in the I-395 corridor and give commuters another great reason to try HOV-3 travel, carpooler drivers will go free to DC, even if they drop off their passengers on Eads Street. Here’s how it will work:

1. A driver carpools on the northbound 395 Express Lanes with their Flex in HOV Mode and exits the Lanes at Eads Street to drop off passengers at the Pentagon or Pentagon City.

2. The driver then sets the Flex to toll mode and gets back on the northbound Lanes from Eads Street.

3. Since the technology on the Lanes will know the vehicle was just carpooling a short time earlier, the driver won’t be charged a toll for the last part of their trip.

Drivers should put their Flex in toll mode to avoid getting pulled over by Virginia State Police troopers who will enforce for cheaters.

Carpoolers and vanpoolers who don’t have an E-ZPass® Flex should get one.

The E-ZPass® Flex is available at select DMV locations, retailers and online. Head over to the Virginia E-ZPass® website at www.EZPassVA.com.

395 Express Lanes: Slugs, and drivers, are free to DC

The 395 Express Lanes will open this November and the project team has announced a perk to keep slugging strong on I-395.

When the 395 Express Lanes open, drivers who carpool up to Eads Street and exit the Lanes to drop off sluggers will be able to get back on the Lanes for free – but other drivers who first get on the Lanes here will pay a toll. (Of course, if you carpool the entire trip into DC, it’s free as well.)

That’s right, drivers who take sluggers to Eads Street get to go free for the rest of the trip.

How will it work?

1. Carpool up the northbound 395 Express Lanes with your Flex in HOV mode, just like normal.

2. Get off at Eads Street to drop off slugs at the Pentagon or Pentagon City. (Or keep carpooling into DC.)

3. Switch your Flex to “HOV off” — since you don’t have 3 people in the car anymore — before you get back on the northbound Lanes from Eads Street. That way you don’t risk getting pulled over by Virginia State Police troopers who are looking for real cheaters.

4. Even though your Flex will be set to “HOV off,” the operators will know you carpooled to Eads Street. You won’t be charged to finish your trip to the city. Pretty great, right?

But what if I forget to flip the switch back?

A sign on the ramp to get back on the Lanes will remind you to flip the switch. And, the operator of Lanes is giving Virginia State Police tools to help to validate the earlier part of your trip, just in case you forget to switch and get pulled over.

It’s that easy – a flip of the switch and you go free to DC.

If you don’t have an E-ZPass Flex yet, visit EZPassVA.com.