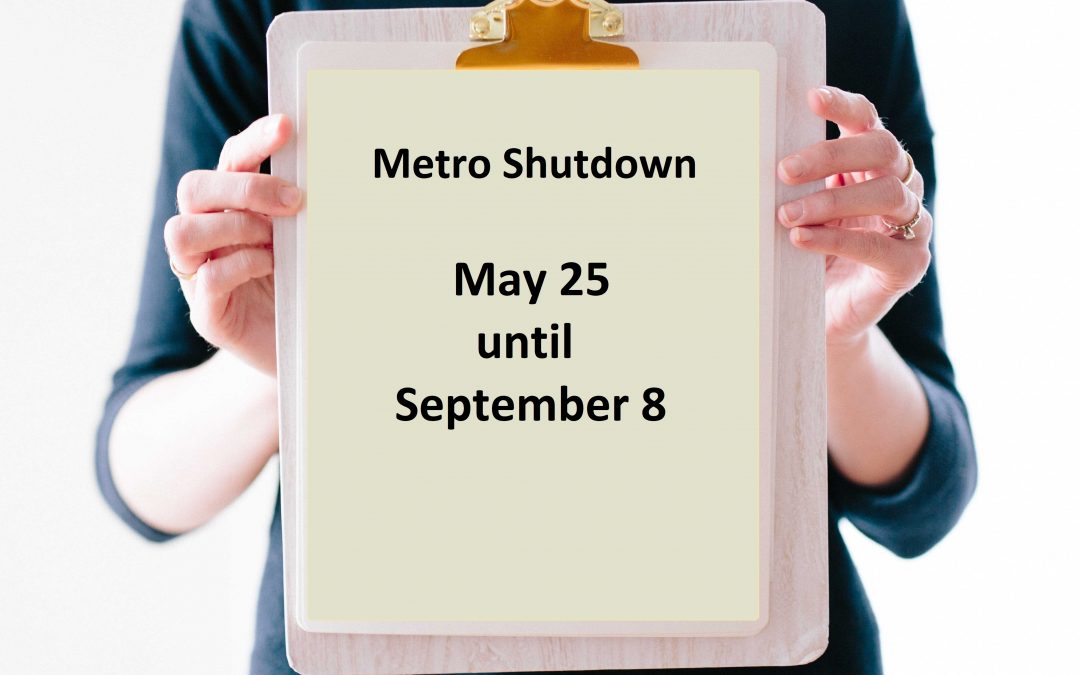 Following extensive inspections and engineering analysis, Metro and its contractor have identified additional structural modifications necessary to address a longstanding design issue at Braddock Road Station. The repairs are needed to ensure a safe platform surface that is level with train doors, a requirement of the Americans with Disabilities Act. To address the issue, Metro today announced the summer shutdown of six Blue and Yellow line stations south of Ronald Reagan Washington National Airport will be extended by six days, through Sunday, September 8.

Train service south of National Airport is now expected to resume on Monday, September 9. This aggressive but achievable schedule is predicated on support from local jurisdictions that enables Metro’s contractors to work around the clock. When stations reopen to customers and rail service resumes, residual construction activities such as new tile installation and other station work will likely continue at all six stations south of Washington National Airport.

“The Platform Improvement Project is a mega project designed to repair and improve our stations for decades to come, and we need to get it right. Experts have shown us that fixing the Braddock hump is a complicated project, but for customer safety and accessibility we have to do what’s needed, even if that means extending the shutdown,” said Paul J. Wiedefeld, Metro General Manager and CEO.

Free express and local shuttle bus service planned for this summer will remain available for customers until the stations reopen and train service resumes.

The platform at the south end of Braddock Road Station is approximately two to four inches higher than the level of the train floor, creating a barrier for wheelchair users exiting a train and posing a tripping hazard for all customers. Unlike the other platform work, in order to fix the uneven surface, known as the “Braddock hump,” the contractor must install six shoring towers to support the 1.6-million-pound platform deck. Once the platform deck is supported on the six shoring towers, sections of the existing station will be removed to allow for the platform deck to be lowered and new bearing plates will be installed. At that point, the planned platform reconstruction can begin.

In addition to the added work at Braddock Road Station, the project has expanded to include replacement of tiles throughout the six stations—not just on the platforms. At Huntington Station, the contractors will begin to prepare for another major capital project—a new, fully-accessible station entrance connecting the middle parking garage to the station’s platform. As a result, demolition of the south parking garage has been postponed and will become part of the larger entrance project.

Over the next three years, Metro’s Platform Improvement Project will reconstruct the platforms at 20 outdoor stations. Following completion of the first six stations in 2019, the remaining 14 station platforms to be reconstructed in 2020-2021 are: Greenbelt, College Park, Prince George’s Plaza, West Hyattsville, Vienna, Dunn Loring, West Falls Church, East Falls Church, New Carrollton, Landover, Cheverly, Addison Road, Arlington Cemetery and National Airport. Service plans for these stations are being developed, including possible coordination with construction activity associated with the Purple Line in Maryland and the Transform 66 project that includes new lanes on I-66 and other multimodal improvements.

Customers can stay up-to-date on the project at wmata.com/platforms.

Metro is investing in system safety, reliability and the region’s economy through its 10-year, $15 billion capital program. For the first time in Metro’s history, the capital program is bolstered by dedicated funding from Maryland, Virginia, and the District of Columbia. The capital program will improve the customer experience and keep the region’s infrastructure in a state of good repair by investing in new railcars and buses, improving stations and platforms, upgrading fire-suppression and emergency response systems, replacing and repairing tracks, tunnels, bridges, signals, and communications systems, rebuilding decades-old bus garages and providing modern customer amenities such as passenger information systems. In spending local taxpayer dollars for capital projects, Metro is seeking to reinvest in our hometown economy, creating jobs and encouraging participation from disadvantaged, minority-owned, and small businesses in the region.